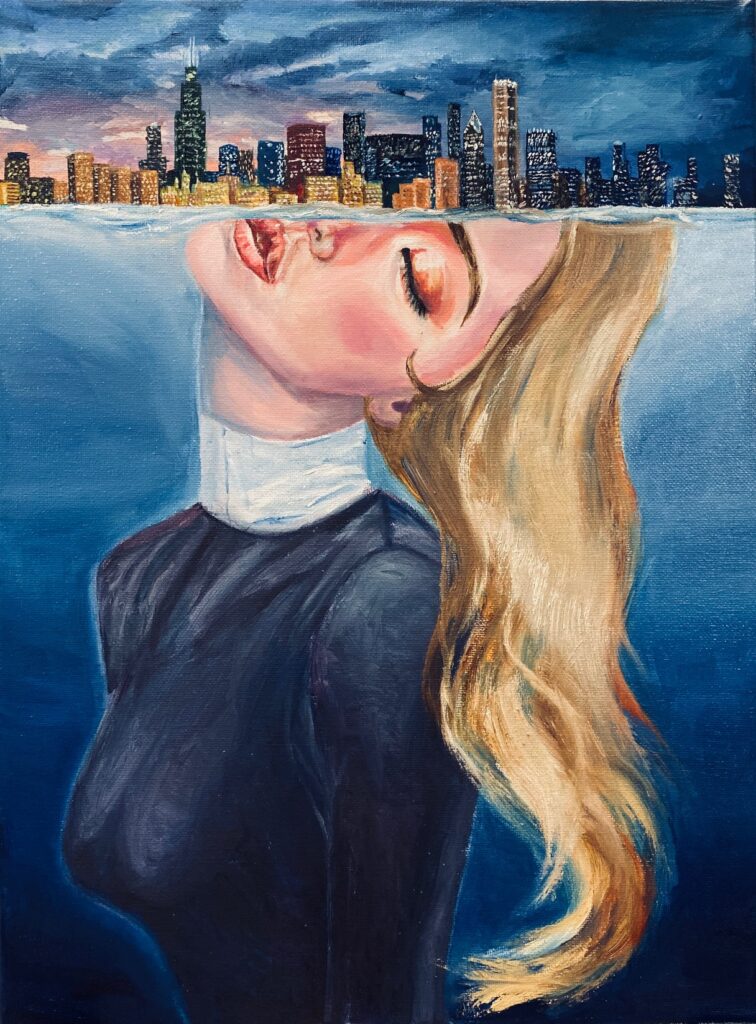 We were down by the Hudson River to collect wood for our raft. Jenna had brought her mother’s very own peeler, shaped like a corn husk, and we had decided it would be perfect for peeling the bark off the trees.

I had brought my brother’s old red bucket, the one he only let me have because of the hole at the bottom. Jenna immediately proclaimed it ast useless because she had asked specifically for a green one, and red wouldn’t do at all. I privately thought that the bucket would be far more useless for the hole rather than the color, but I let Jenna lecture me on the importance of forest green versus lime green anyways.

“—and if you must use a red bucket, then it can’t be fire engine red. Fire engines signify death, Laney! To use a red bucket like that would mean that we’d drown as soon as we put the raft on the water.”

Moe hadn’t brought anything but her usual sketchpad, which she rarely ever parted with. Once, Jenna had asked to see the sketch she was working on, and Moe made her stand six feet away and held it up so she could squint at it. It was surprising that Moe had even deigned to come down near the water with her sketchbook.

“I wish you would stop glaring at the water, Moe,” Jenna huffed, throwing down the peeler after four unsuccessful attempts to carve bark. It plopped down into the muddy soil, the sharp blade stained with bark and tarnished.

Moe stared out at the water; well, the tiny strip of river that our parents only let us be near because of how small and shallow it was.”I’m not glaring. I’m trying to draw that lady.”

Jenna and I both glanced out at the water, then back at Moe.

“There’s no one there. Stop pulling our legs!” Jenna trotted over to the tree stump Moe was on, and peered over her shoulder. “Is that her? Why’s she so ugly?”

“Hush!” Moe cried out. “She’s right there! She used to be pretty, alright? Don’t insult her, you’ll make her sad.”

“Like an imaginary person can be sad,” Jenna scoffed. She picked up a stone from the riverside and skipped it in the direction Moe was staring at. At her disapproving glance, Jenna picked up a whole handful of stones and flung it at the river.

“Stop it!” Moe screeched. She shoved her sketchpad into my hands and I took a step back in surprise. Jenna opened her mouth defiantly to retaliate, but before she could, Moe shoved her hard. Jenna, maybe out of shock or for the sake of being dramatic, fell backward and landed squarely on the wet riverside.

“Moe!” Jenna wailed, raising her muddy hands in protest and wiping them roughly on her skirt. “My mama’s gonna kill me! This is my best skirt!”

I tuned out their argument about the practicality of wearing a skirt on a riverside playdate and stared down at the sketchpad that was so unceremoniously shoved into my hands. The lady drawn—if that could even be considered a lady—was all mottled and disgusting, with swollen cheeks and water coming out of her mouth. Her body was drawn so that it twisted grotesquely to the side. Moe had been in the process of drawing another harsh line down the paper to add to her hair, which was floating lifelessly around her face. I shuddered. Moe was talented, yes, but sometimes I wished that she used her skills to draw flowers or trees or even us—not drowned bodies.

“If she’s drowned and dead, how is she over there?” Jenna demanded, jabbing her finger towards the river. She had gotten up, the back of her white skirt all brown and muddy. They had apparently circled back to the discussion of Moe’s phantom lady. “Did she drown in that river? Only toddlers could drown there. It’s shallow. Is she a toddler? Is she really short?”

“She’s none of that,” Moe snapped. “She didn’t drown here, she drowned at the main river. Under the bridge with all the city lights.”

“Then why is she here?!” Jenna stuck her tongue out at Moe, who made a little noise of disapproval. “It’s smelly here. There’s so much mud. And Laney didn’t pick up her trash last week, so her candy wrappers are in the water. Surely she can find a better place to haunt.” All of us took a judging look at the brown water. It swished pathetically around, washing up a plastic bottle like some sort of sad offering.

“She’s not here for the river, Jenna,” Moe said, as if it was the most obvious thing in the world. She turned to stare at the opposite shore with large, mournful eyes. “She wants to warn us about the Hudson.”

“The river?” Jenna narrowed her eyes. “Well, tell her thanks but I think we’re old enough to know not to drown in three feet of water.”

“Not the river itself,” Moe sighed, with the air of a genius scholar trying to teach an unruly disciple. “Haven’t you heard the legend of the Hudson?” At Jenna’s shake of her head, she looked at me. “Laney?” I shook my head and Moe sighed once more. “Alright. Don’t tell my Pa I told you guys though.”

She leaned in conspiratorially. “The Hudson isn’t actually named the Hudson. The original name was Muhheakunnuk, meaning “Great Waters Constantly in Motion.” It was only after this man named Hudson came along that they were forced to rename it.”

Even though Moe had barely even started the story, Jenna found the need to interrupt. “They didn’t have to do anything. My big sister told me you shouldn’t do things just ‘cause others want you to. Did they know that? Maybe my big sister should’ve told them.”

Moe huffed, kicking some dirt in Jenna’s direction. Jenna yelped and moved back, but since she hadn’t bothered to move from the last time Moe pushed her, she just stepped further into the water, getting her pink ballerina shoes wet.

“Would you let me finish!? See, because he polluted it, and the original river was no longer pure, so they refused to give it the grand name that it deserved. The water spirits that kept it clean slowly died off or went crazy because of the pollution. You know that myth about dead bodies in the Hudson?”

Moe paused for dramatic effect and I dutifully nodded my head. Seeing that Jenna was about to respond in what was most likely going to be another unrelated tangent, Moe hurried on.

“What’s that one doing then?!” Jenna asked, her face white. Despite her earlier claims of no one drowning in three feet of water, she looked terrified as she stepped away from the river’s edge. She reached down and shook the water from her shoes, keeping one hand up like a water spirit was going to attack her at any moment.

“This one’s okay. She’s trying to warn us not to end up like her. All her sisters went crazy or died, so she’s forced to wander around the river alone. Water spirits can’t leave the river they’re bound to, you know. And… ” at this, Moe glanced worriedly at the river, then lowered her voice. Both Jenna and I unconsciously leaned in closer to hear her better.

“She blames herself for what happened to her sisters. See, the man who polluted the river, Hudson, tricked her into falling in love with him. He told her he would take her on his boat and show her the other rivers of the world, but he lied. He just wanted to raid the river and steal all their resources. He used her to get close to the river and ruin it. And as—”

“No!” Jenna interrupted passionately. “It’s not fair, it wasn’t her fault!” She puffed up her chest and turned to face the river, her voice loud but a little shaky. “It wasn’t your fault!”

Nothing responded, and Moe just sighed and went on.

“So, as punishment for both him and the water spirits for allowing it to happen, they named it the Hudson, to mock the water spirits for losing their river, and to remind Hudson that his legacy would forever be a stained river with dead bodies. Hudson tried to trick this water spirit again by lying and saying that if she sacrificed herself, then her sisters would live.”

“Her poor sisters,” Jenna whimpered. “I’m gonna go tell my big sister that I would sacrifice myself for her.”

“Shush Jenna! Listen!” Jenna fell quiet as Moe continued, and even the river seemed unnaturally silent, almost as if it was listening to the story.

“So, Hudson used her sacrifice as a distraction so he could escape with his men. But as a special punishment for this water spirit, they wouldn’t let her die believing she saved her sisters. They brought her back so she would be alone and continue witnessing the destruction and pollution of what she used to know to be the Great Waters.” Moe paused, then looked at us, her eyes shining. “Isn’t that sad?”

“Ugh!” Jenna blurted out, disturbing the hushed silence that had fallen over us while Moe told us the ending. “Moe, you’re always so depressing!” With that, Jenna stormed off, loudly declaring the story to be “the worst thing I’ve ever heard in my whole life!”

I stayed next to Moe. Almost out of reflex, I found myself looking in the direction of the Hudson. The water was still murky, with the plastic bottle bobbing dejectedly up and down, but a faint glow caught my eye. I could just barely make out the weak outline of a person and a flash of blonde hair before it disappeared, and Moe and I were alone once again.